We love it when patients have specific questions about their treatment options, and love it even more when our patients have done their homework before their consultation with us. Here at our office, we offer the latest techniques in orthodontics and dentofacial orthopedics based on patient comfort, clinical efficiency and scientific evidence.

I’ve recently had a few patients ask me about Crozat technique and associated appliances. If the technique and appliances are so great, why don’t we use them in our office? The short answer is that we have more comfortable and efficient methods in our modern orthodontic “bag of tricks” to do the same thing based on – you guessed it – patient comfort, clinical efficiency, and scientific evidence.  For practical reasons in younger children, an appliance that can be taken out or interferes with school, sports, music, etc will usually stay in its case, which is not exactly a recipe for success. For adults, we can do pretty much everything a Crozat did with clear aligners or lingual braces. And, like all removable appliances of its kind, it moves teeth by tipping them, which isn’t always favorable. For the long answer, grab a cup of coffee and keep reading. It’s a bit dry, technical and historical so you may need it! As my residency director used to say, “If you want to see what the next magical appliance is, go to the library and see what they were doing 50 years ago.” So we’ll take a trip through the history books.

Crozat appliances were part of our clinical training in orthodontics residency, along with many other historical techniques that chronicled the evolution of modern orthodontics, and never really took off in America for various reasons which we’ll get into later. Some of the underlying principles behind the Crozat appliance are still used every day, but its actual use has fallen out of favor as more efficient techniques and greater understanding of clinical effects through 3D imaging have increased the overall orthodontic knowledge base.

What is a Crozat Appliance? Is it new? And what does it have to do with mid-century European Socialism? 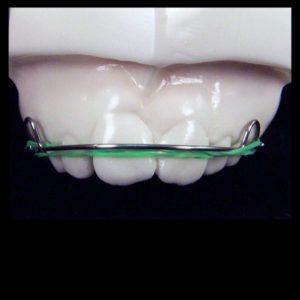 A Crozat appliance is a removable orthodontic apparatus developed by George Crozat in the early 1900s. It was initially made entirely of precious metals, but as the field of metallurgy  progressed, less expensive and more easily obtained metals could be used. This was a major selling point in comparison to fixed appliances and braces, which could only be made with precious metals at the time. This wasn’t an issue in the US, but the use of precious metals in dentistry was banned in Nazi Germany, and German orthodontists were forced to make do with materials on hand. In short, they couldn’t make braces, but they could make a Crozat.  As a result, from 1925-1965, almost all orthodontic treatment in Europe was done with removable appliances, while in the US, treatment was done almost exclusively with fixed appliances (fully banded teeth).

Other factors in mid-century American orthodontics put removable appliances on the sidelines. First, the treatment philosophy of Edward Angle,  who emphasized precise positioning of each tooth with fixed appliances was very popular in the US. These movements were not possible with removable appliances, and for the most part, still aren’t.  Second, socialized healthcare developed a lot more quickly in Europe, which placed the emphasis on limited orthodontic treatment for large numbers of people, often delivered by general practitioners rather than orthodontic specialists.

In the mid 1960’s, orthodontic treatment in America was done primarily with fully banded 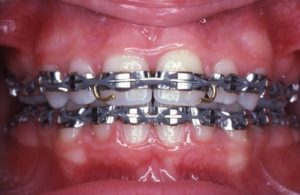 braces, with limited options for removable and/or esthetic treatment. For patients who were not willing to wear fully banded braces, Crozat appliances were one of the few other ways available to straighten teeth. Like many orthodontic products today, advertising and the popular media touted the benefits of this then-revolutionary technique, which spurred a flood of inquiries to orthodontic training programs around the country. Even in its heyday, Crozat technique was popular among general dentists at the time, but not widely used by formally trained specialists in orthodontics. By and large, the results did not stack up to what could be achieved with braces. Dr. Perry Hitchcock, then Chairman of  Postgraduate Orthodontics at the University of Alabama, had fielded so many calls and letters in 1966, that he sent the following response to every inquirer, and made his form letter part of his keynote speech at the 1971 Texas State Orthodontic Society meeting.

“To Whom It May Concern:

The Crozat appliance is taught in the postgraduate Orthodontic Department of the School of Dentistry of the University of Alabama. It occupies a relative position, along with the labiolingual technique, the twin-wire technique, the edgewise technique, and now the Begg technique. The way we teach it, it is not used for every and all types of malocclusion. We are selective in its use, and our students have two years during which to become familiar with it. In our opinion, some cases do call for removal of certain teeth, and occasionally a Crozat appliance will be used to treat a case in which tooth removal is part of the treatment plan. For many conditions, we feel that other appliances will be the treatment of choice, and in the best interest of the patient.

For those conditions which are amenable to treatment by removable appliances. we feel the Crozat appliance does an excellent job in skillful and trained hands. The best potential of the Crozat appliance is realized in the hands of full-fledged, adequately trained specialists in orthodontics.

We insist on proper qualifications of orthodontists who take our three-day  advanced education course in the Crozat technique, when it is offered.

We believe it would be in the best interest of the laity if they would also inquire about the qualifications of those into whose care they entrust your children.”

The appliances and technique had some significant shortcomings, which were highlighted in the landmark article “Pitfalls of the Crozat appliance”, also written by Dr. Hitchcock and published in the November 1972 edition of the American Journal of Orthodontics and Dentofacial Orthopedics.

Many of the purported benefits of the technique were eloquently rebutted by Dr.

Hitchcock and with the exception of a handful of eccentrically dedicated practitioners scattered around the world, the Crozat technique faded into history. Was there anything wrong with the technique? Not really. Just like there’s nothing wrong with driving an original VW Beetle. It’ll get probably get you where you want to go (when it works), and some people love the idea of taking a ride in a classic car. But why drive when you can fly?

Here are some examples as to why the Crozat technique fell out of use in modern orthodontics:

NOTE: The author, Dr. Jared Gianquinto, is an orthodontist in the private practice of orthodontics and dentofacial orthopedics in Bakersfield, CA. He was trained at Temple University and Naval Medical Center San Diego, completing orthodontic specialty training at Temple University and is past president of the Kern County Dental Society. Dr. Gianquinto’s unique combination of extensive past general/cosmetic and current specialty orthodontic practice qualify him an expert in two-phase treatment, extraction and non-extraction treatment, clear aligners (Invisalign), accelerated orthodontics and multiple bracket systems. The opinions expressed here are protected by copyright laws and can only be used with written permission from the author.

Whether you’re wondering if braces are the best option for your child, or you’re considering adult treatment options like Ceramic Braces or Invisalign, we would love to get started with a free consultation!